THE 12 HOUSES OF ASTROLOGY
The Astrological sky is divided into twelve equal parts representing the 12 houses in astrology. Each house represents a different part of your life or challenges that you may face on the way. The zodiac is constantly in motion in the sky. The sign which rises in the eastern horizon at the time of birth of an individual is his Ascendant, Lagna or Rising sign.

This represents the first house in his natal chart. The subsequent houses are numbered two to twelve. Each house has a span of 30 degrees. 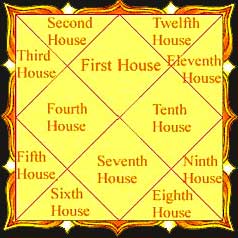 The Astrological houses describe a specific field of experience in the native's actual life.

The cutting of the chart into 12 houses, referred to as "House system", varies from one astrologer to another. There are several methods: Placidus - the most ancient one, dating back to the 17th century - equal houses (with variants), Koch, Regiomontanus, Campanus, Alcabitius, Topocentric, Morinus, etc.

The concept of house system in astrology were first set out by the Babylonians and are now used and recognized by today's astrologers. Each house has its own elements, characteristics and ruling planet which influence the native's life.