The Angles
The Ascendant

The Ascendant is the exact degree in the zodiac which was on the eastern horizon, or rising on the horizon at the exact time of ones birth. The term Ascendant and Rising sign are interchangeable. As the Earth revolves, this point constantly changes. Every 4 minutes the degree of the Ascendant changes.

The cusps of the right angles created by the horizon and the meridian axes are called the angles of the chart. The important points on the horoscope are called as:

The Ascendant - Find your Ascendant Sign using this link 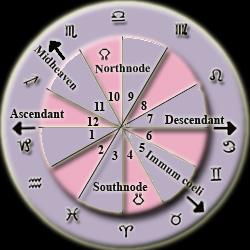 The Medium Coeli or the Midheaven is at the top of the horoscopic chart. It is the point further south in the zodiac. The Midheaven point is the cusp of the 10th house. The Midheaven represents ones most exposed position, his public status, and how he presents himself to the world at large. This position is associated with the career.

Vedic astrology is an integral part of this culture and has been practiced since time immemorial. We also get to know from various collections of texts and other records that the origin of Indian astrology is also attributed to various gods and Rishis.Infact the basis of the astrological principles which is followed now are the ones written by Rishis like Parashara, Varahamihira, Garga, Jaimini and their followers. According to history and archeological evidences the extensive written discourse on astronomy belonged to the 5th century CE which is referred as the classical age of Indian astronomy. There is also a mention about astrology by Kalyanavarman in his ancient scriptures like `Brhat Parasara Horasastra` and `Saravali`.Even in the epic Mahabharatha,episodes like `Bhishma Parva` and `Udyoga Parva`state many astrological descriptions and omens just before the Mahabharata war. There is a very thin margin between astronomy and astrology for happenings like two eclipses, a solar eclipse and a lunar eclipse occurring, creating a rare 13 day lunar fortnight were first depicted only in an astrology scripture.

The Descendant is a point opposite to that of the Ascendant in the horoscope chart. It is the degree of the zodiac residing on the western horizon at the moment of birth. In the chart this point marks the cusp of the 7th house and the beginning of outward expression. Houses 1 through 6 have had a personal tone, but now they will begin to relate to our interaction with others. The Descendant suggests how you relate to those nearest to you. The seventh house is sometimes called the house of partnerships and marriage. It is very fortunate when your partner's Ascendant is in the same sign as your Descendant because this mirror image of each other produces the most constructive spousal and compatible relationships.

The Imum Coeli or Nadir

The Imum Coeli or Nadir is opposite the Medium Coeli. This is the lowest point on the horoscope and the point furthermost north in the zodiac. The Imum Coeli is the cusp of the fourth house. This is the area of our deepest concern for security and shelter. This is concerned with home, traditions, stability, and nurturing. This is where you seek comfort and protection. Your activities here will be private and concealed. When many planets are near the Imum Coeli , accomplishments may not get the notoriety they deserve.