In some cases the horoscopes contain a series of aspects that form one or more configurations.

These configurations represent a powerful energy force which can be advantageous or detrimental according to the aspects involved.

Some of the configurations formed by major aspects are : 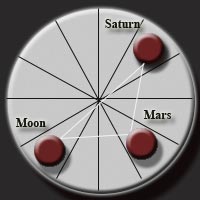 This type of configuration occurs when two planets oppose each other and both are squared by a third planet. The T-square is a difficult combination of aspects as it indicates the need to overcome many obstacles, but at the same time, it produces a strong driving ambition to do so. The tension and awareness created by the two planets in opposition must be resolved by the planet receiving the double square. This third planet becomes a focal point of much importance in your chart.The T-square causes a lot of difficulty in the life but they also spark action and the drive necessary to achieve. Living with the demands of a T-square can be very challenging, but when the energy of this configuration is well-directed by a mature individual, it often leads to significant accomplishments. The T-square is an impetus to success that many famous people have.
The Grand Cross 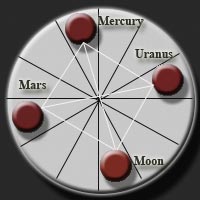 The Grand Cross consists of four or more planets spread at intervals of approximately 90°. This is a very uncommon byt powerful configuration. A cross or two oppositions is formed in the chart. This configuration generally indicates a person living under continuous stress and facing a seemingly never ending series of challenges. This aspect places your life in a constant state of tension and upheaval. The Grand Cross is very rare. It characterizes an individual who should be concerned with people and personal or intimate relationships, rather than criticism, ideals, and values. It is hard for you to avoid spilling your energies in diverse and related directions. Many obstacles will interfere with the realization of goals.
The Grand Trine 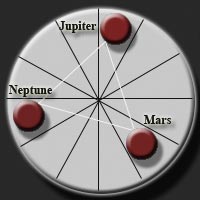 A Grand Trine occurs when three planets are placed an equal distant apart, approximately 120° from each other. This is less common than the T-Square but is much more beneficial in its effects. This configuration suggests that you have earned some special advantages to be enjoyed in this life. The trines indicate a harmonious flow of energy and potential for creative self-expression. Sometimes, however, the Grand Trine confers too much stability and leads to inertia and a lack of motivation to dynamic action.Many with Grand Trines do not accomplish as much as they could and should in life, simply because the easy flow of events does not necessarily stimulate to achievement and ambition.
The Yod 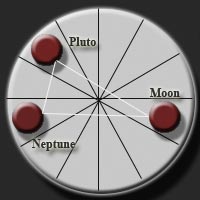 A Yod occurs when two planets in sextile (60° apart) and both form an inconjunct (a 150°angle) with a third planet. The third planet in the inconjunct represents the action point of the Yod; the mid point between the other two planets is the reaction point.This is also referred to as the Finger of God or the Finger of Fate and is an uncommon configuration.The configuration is usually troublesome and difficult to handle during childhood but can develop into an ingenious force in later period. This configuration is often foudn in the charts of spritual persons of repute.
The Stellium
A Stellium is a configuration that occurs when three or more planets are in the same sign or are in the same house. To be truly significant, a stellium should have four or more planets involved. This places much focus upon the affairs ruled by this house and the tendencies shown by the sign involved. Strong will power, self-awareness, and a direct stimulation to action will be shown in these affairs.
Disassociated Aspects
When planets are placed at the very beginning or at the very end of a sign, they sometimes form aspects which do not adhere to the specific formula of compatible or incompatible signs.This is called as disassociated aspects.