WHAT CAN BIRTH CHART TELL YOU ?

A birth chart clearly shows the positions of the stars at your time of birth in the place you were born in. It can also be referred as the natal chart for both explains the same concept in the chart. The best accuracy in the interpretation of the birth chart is achieved with correct entry of date of birth (DOB), time of birth (TOB) and place of birth (POB).

Birth chart is nothing but a unique cosmic-spiritual blueprint of an individual. There are cases in which two people might have the same birth chart but however there are various other astrological factors which will in turn influence on the birth chart.

The birth chart also determines the various specific energies which will act in our lives. There are various essential data's which are derived from the birth chart. For interpretations using birth chart knowing of the Sun sign along with the rising sign or ascendant is very essential for it gives an in-depth information about oneself. 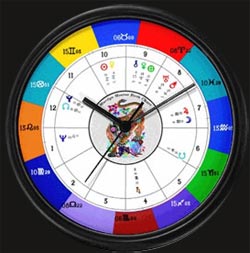 This doesn't mean that the moon sign is not important for it helps in knowing a person's emotions and intuitive side of his/her nature. Though a general description of a person can be derived from his/her birth chart, the moon signs and the nakshatras also supplements for a broader spectrum of elaborate understanding of an individual. The birth chart which is also constituted by the Nakshatras are considered to be the sub-constellations within the 12 signs of the Solar Zodiac.

The birth chart wheel is comprised of different shapes of character or symbolic figure that is usually engraved or incised at the edge of the wheel. These shapes represent the 12 signs of the Zodiac. There are also other symbols within the birth chart which represents various other planets including the Sun and the Moon. For each one in the birth chart the planets position vary in different signs and houses thus making each chart unique. The position of the planet in the signs and the houses is also based on the factor of when and where you were born. Sometimes interpretation is also done based on other factors in the birth chart like minor asteroids, moons and other celestial points such as Chiron, vertex etc.The inner wheel of the birth chart is represented by 12 numbers which is from 1-12 and they denotes the Houses. These houses in turn according to astrology are supposed to represents a different area of life. Houses are nothing but the demarked area of the sky above and below the birthplace depending on the horizon at the time of a person's birth. The first position of the House starts at the place of the rising sign or the ascendant and then move in the anti-clockwise direction of the birth chart wheel. At times one might find empty zodiac signs and houses in the birth chart with no representations of planets in them. The reason behind this is that the planets might be either clinged together or distributed far apart. But however this does not effect the chart much or do not play a major role. Each zodiac sign is associated with three different elements and qualities. The elements include Fire, Earth, Air or Water and the qualities are Cardinal, Fixed or Mutable. The birth chart analysis first requires study of a person's signs in certain elements & qualities.

Another feature in learning a birth chart is the aspect line which links the planets together. Though not all these aspect lines are important there are certain lines which form the basis for birth chart analysis. These aspect lines forming the links in the birth chart forms something known as aspect patterns which are nothing but geometric shapes like the 5 pointed star, rectangles, big squares, a triangle, etc.The interpretation of the birth chart needs a lot of "psychic insight" and also other intellectual analysis and learning of the of the symbols & connotations of the aspects.

What can Natal Chart can tell you